Greece and Its Creditors Get Back on a Collision Course 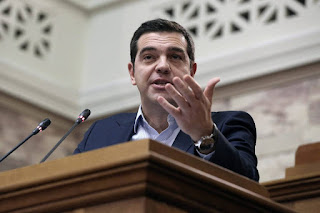 In a continent beset by multiple crises, Greece remains the cradle of European dysfunction. The country may have dropped out of the headlines in recent months, its multiple challenges seemingly buried under a tide of bailout cash. Yet it still presents the greatest risk to the survival of the eurozone. That is because Greece’s circumstances oblige the eurozone to do something it has so far appeared incapable of doing, except under conditions of extreme financial stress: take a collective political decision.

The first test of the eurozone’s decision-making capacity will come at a meeting of eurozone finance ministers in Brussels on Monday. On the face of it, the decision facing them appears straightforward: They need to complete the second review of Greece’s bailout, which will set the targets for the remaining two years of the program. That decision, in turn, will unlock the next tranche of funding. The outlines of this deal are already in place: Greece has more or less reached an agreement with its creditors—the International Monetary Fund, the European Commission and the European Central Bank—on what it must do to get the cash.

In fact, the situation is far from simple. Germany and the Netherlands have promised their parliaments that they won’t ask for more money for Greece unless the IMF also resumes lending to Greece. But the IMF says it won’t do this unless it is satisfied that Greece’s debt burden is sustainable. For the IMF, this is a question of institutional credibility. It has already put its name to two failed programs, and it is determined that it will only join a third program if it is convinced that Greece can return to the markets at the end of it, its financial sovereignty restored.