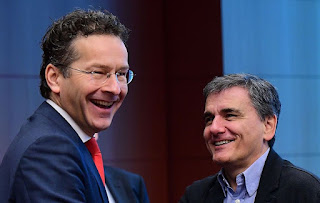 This week, the European Union’s finance ministers granted some new debt relief to Greece. The new “short-term” measures are better than nothing -- but they’re less than a convincing solution to a problem that has dragged on far too long.

The deal, sketched out and agreed to in principle earlier this year, should help the Greek government convince voters to keep accepting much-needed domestic reform. That’s good. It isn’t enough, though, to put the country’s debts and budget plans on a sustainable footing. That’s why the International Monetary Fund, whose support will be necessary to achieve that larger goal, isn’t yet on board. After years of muddling through, the issue still isn’t resolved.

In the approach to the latest talks, French Finance Minister Michel Sapin acknowledged that “Greece has made huge efforts. This is the first Greek government in a long time that has implemented its commitments.” He said it was vital that Europe respond by recognizing its obligation to help ease the country’s debt burden, both as a reward and to encourage further improvements in the business climate.

All true. Greece can’t be accused of doing nothing to help itself. The banking system has stabilized after three bouts of recapitalization, and deposits are returning, albeit slowly. The economy is growing modestly. The country posted a primary budget surplus for the first 10 months of this year. State asset sales are proceeding slowly but surely.