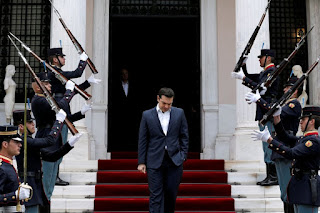 When he got elected nearly two years ago, Greek Prime Minister Alexis Tsipras promised to stand up to the EU's austerity demands and restore his country's dignity. His failure to deliver risks plunging the country into a new political crisis.

The neighborhood around Villa Maximos could be out of a fairy tale: There's an avenue lined with bitter orange trees in front of Alexis Tsipras' official residence, and the National Garden, with benches for couples, is located just next door. It has been reported that the Greek prime minister and his cabinet used to take calm strolls here. After his victory in early 2015, Tsipras had ordered that security barriers in front of parliament be torn down. "We don't need a police state," he announced. In other words: the 11 million Greeks who love us will take care of our security.

Today, 21 months later, the neighborhood has changed. Two riot police buses now seal the avenue leading to Villa Maximos. Officers stand watch in front of it around the clock.

The people's love of Tsipras has turned into anger. Because of their diminishing salaries, air-traffic controllers, doctors and teachers are standing up to the government. About four weeks ago, retirees tried to topple the police buses, their faces full of anger and disappointment. When police officers drove the seniors back with tear gas, an outcry swept across the country: Hadn't Tsipras promised that things like this would never happen again, they asked?

More
Posted by Yulie Foka-Kavalieraki at 11:35 AM