Obama Arrives in Greece to Reassure Europe on Continuity of U.S. Alliance 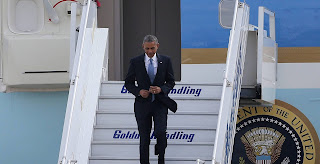 President Barack Obama arrived in Greece Tuesday for the start of a weeklong trip overseas that will be dominated by efforts to assure nervous world leaders of continuity in U.S. alliances and key policies in the wake of Donald Trump’s election victory.

With just two months left in office, Mr. Obama isn’t expected to make major policy strides during stops in Greece, Germany and Peru. He chose to visit Europe during the last foreign trip of his presidency to underscore his concerns about the economic and security future of the continent, White House officials said.

While in Greece, his first visit to the country as president, Mr. Obama will meet with Prime Minister Alexis Tsipras. He will also attend a state dinner Tuesday evening.

On Wednesday Mr. Obama will tour the Acropolis before delivering a speech that will “focus on the important work that’s been done to try to address the economic challenges in Greece and Europe and around the world,” said Ben Rhodes, one of the president’s deputy national security advisers.