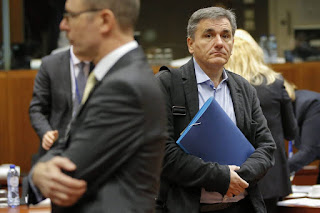 Greece’s finance minister warned Germany and other creditors to agree on a debt restructuring in coming weeks, or miss the best chance to bring the struggling country’s seven-year crisis to an end.

German leaders including finance chief Wolfgang Schäuble have said Greece’s debt can be addressed at a later date. Mr. Tsakalotos, however, warned that procrastination could undermine the country’s hopes of recovery in 2017, and that the coming weeks offer an important opportunity for the eurozone to show it can fix, rather than avoid, its problems.

“If we kick the can down the road and say ‘we will decide in two years’” about how to make Greece’s debt sustainable, then investors will also postpone decisions about investing in Greece, said Mr. Tsakalotos, a leading figure in Greece’s ruling left-wing Syriza party.