Clock ticks for EU to reach IMF deal on Greece 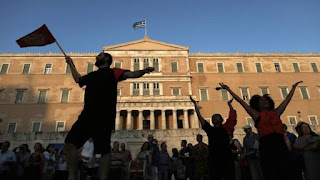 The eurozone is running out of time to secure an agreement this year on International Monetary Fund participation in Greece’s €86bn bailout amid splits over the country’s economic reforms, budget targets and debt relief.

The fund still wants reluctant eurozone capitals to provide more detail about how far they will go to ease Greece’s mountainous debt burden.

Getting the IMF to take part in the Greek rescue has been a key objective for eurozone governments, notably Germany and the Netherlands, since the bailout was agreed last year. Berlin sees the fund’s participation as critical to convince sceptical German lawmakers of the rigour and robustness of the programme — but is also one of the governments most reluctant to grant Greece major debt relief.

People familiar with the talks also say a decision on IMF participation in the bailout is on hold until the latest progress review of the Greek programme, which began last month, is completed.

Officials are racing to make headway ahead of December 5, the last scheduled meeting this year of eurozone finance ministers. The IMF has indicated it will seek to decide by the end of 2016 on its participation.

More
Posted by Yulie Foka-Kavalieraki at 8:32 AM