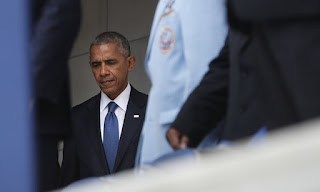 The US president, Barack Obama, has signalled he will use a critical two-day visit to Athens this week to step up calls for the country to be given “meaningful debt relief”.

Weighing in on the potentially explosive issue of how best to revive the European Union’s most financially strained member state, the outgoing president said debt forgiveness would play a pivotal role in giving people hope. “I am a strong believer that to make reforms sustainable, people need hope,” he told the Greek newspaper Kathimerini before the trip, which will be his final state visit before leaving office. “The International Monetary Fund has said that debt relief is crucial to put Greece’s economy on a sustainable path and set the stage for a return to prosperity.”

Obama, who has blamed the excoriating effects of austerity on Europe’s slowing growth, said while Athens needed to implement reforms, a nominal write-down would help reignite an economy that has lost over 25% of its output since the nation’s financial woes first surfaced seven years ago. At around €330bn (£284bn), or 180% of gross domestic product, Greece’s staggering debt is by far the biggest in the EU.

“That is why I will continue to urge Greece’s creditors to take the steps needed to ensure the country is well placed to return to robust economic growth, including by providing meaningful debt relief,” he said in the interview. “Getting that done would not only fuel the Greek economic recovery, it would show that Europe can make its economy work for everyone.”