Syriza at odds with Orthodox clergy over religious teaching plans 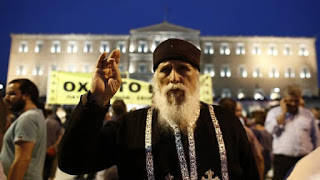 Damned as a “wretched man” and “religious racist” who should be excommunicated, Greece’s minister of education has ignited the anger of hardline Orthodox clerics with his plans to reduce their role in religious teaching.

Under the reforms, due to be introduced next year, the state will take control of religious education in schools, broadening it out to include other faiths.

“In our [party’s] opinion, religious studies are too confessional — they try to persuade pupils of the correctness of Orthodoxy, which is not the job of the educational system,” said Nikos Filis. “We’ve taken the decision to go ahead with changes [in the religious studies curriculum] to reflect the increasing diversity of faiths in our society, especially following the arrival in Greece of so many refugees.”

It is the latest salvo in a battle between Syriza — a hard left party which once campaigned for the separation of church and state — and a religious establishment that still holds huge political sway.

More
Posted by Yulie Foka-Kavalieraki at 8:40 AM