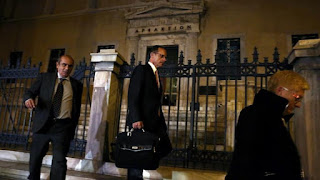 Greece’s highest court has ruled that a media law pushed through parliament by the leftwing Syriza-led government is unconstitutional, raising the stakes in a dispute over the award last month of nationwide television licences to four local business magnates.

Wednesday night’s decision by the 25-member council of state, comprising the country’s leading judges, came after more than five hours of bitter argument, according to people briefed on the deliberations.

The ruling was passed by 14 votes for to 11. Nikos Sakellariou, president of the council, declined to comment, saying details of the decision “must remain confidential”.

According to one person with knowledge of the discussions, the court upheld a constitutional provision that the broadcasting regulator, not the government, was responsible for licensing commercial TV stations.

The ruling marks a damaging setback for the Syriza government, which went ahead with the auction after failing to reach agreement with opposition parties over appointing new members to the regulator’s board.