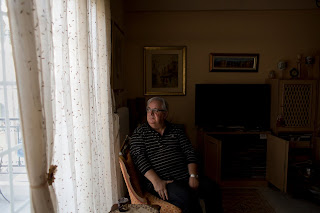 Even after retiring as an accountant, Michalis Hanis dutifully kept up with the mortgage payments on the small house in a suburb of Athens where he has lived for 23 years. That was until several years ago, when Greece’s economic crisis hit.

As part of belt-tightening measures demanded by Greece’s creditors, the government cut his pension by 35 percent. Like his country’s debts, his debts grew.

Now he has joined the tens of thousands of Greeks fighting to save their homes as a sudden wave of repossessions has struck this year, prompting mounting protests across Greece.

“It’s like a horror movie,” said Mr. Hanis, 63, who takes antidepressants and sleeping pills to cope. “You can never relax. I just want to protect my home.”

The country’s creditors have pressed the government to allow the auction of delinquent debtors’ properties, collecting billions of euros that could be used to prop up tottering Greek banks.