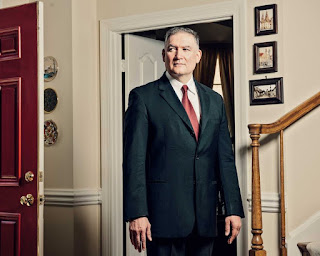 For 21 years, Andreas Georgiou worked in relative obscurity as an economist at the International Monetary Fund in Washington. When the European debt crisis hit and his home country of Greece began teetering toward bankruptcy, Georgiou felt a patriotic urge to help. In early 2010 he applied online to run a newly created office designed to clean up Greece’s much maligned economic statistics. He got the job, and in August 2010 he moved to Greece for a five-year term as president of the Hellenic Statistical Authority.

Six years later, rather than being seen as a hero who helped fix Greece’s broken finances, Georgiou is vilified there. His review of the country’s public accounting exposed years of bogus statistics and along the way made him a target for critics who blame him for the strict austerity measures Greece’s creditors imposed. Last year, Georgiou, 55, moved back to suburban Maryland and now faces a variety of civil and criminal charges in Greece, including one that could put him in prison for life. “This is beyond my wildest imagination,” says Georgiou, who says he feels at times as if he’s living in a Kafka novel. “This would be funny if it weren’t so tragic.”

After arriving in Greece, Georgiou quickly realized that entrenched forces were aligned against him. Within months he discovered his e-mail had been hacked after a member of the board that oversaw the statistics office, known by its acronym, Elstat, showed him a copy of a message he’d written. Although that board was later replaced, its members were especially upset, Georgiou says, that they didn’t get to vote on the stats before he released them. “I told the staff that we are going to draw a line in the sand,” he says. “I don’t care what you did before. We are going to go by the book.”