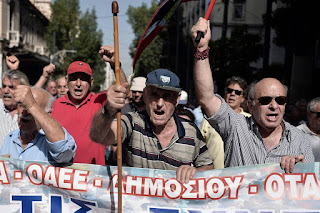 Greece’s budget plan for 2017 sees the economy rebounding strongly after a seven-year slump, but analysts say continued austerity and tight credit conditions are likely to weigh on its recovery prospects amid uncertainty over the country’s public debt.

Finance Minister Euclid Tsakalotos submitted a draft copy of the budget to parliament on Monday that is expected to be finalized in coming weeks after the country resumes talks with lenders on its reform program.

The 53-page budget sticks with Greece’s previous forecasts that the economy is expected to contract by 0.3% this year before growing by 2.7% in 2017. Many see these targets as too optimistic, saying the economy is now entering a period of stagnation, rather than growth, having shrunk by more than 25% since the debt crisis erupted in 2010.

“Although there are some indications pointing to some stabilization in the economy, tight fiscal policy, difficult credit conditions and muted external growth are expected to limit the recovery in 2017,” said Diego Iscaro, senior economist at consulting firm IHS Global Insight. Mr. Iscaro projects the Greek economy will grow by 0.7% next year.