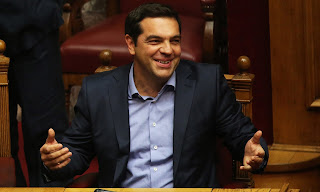 After more than half a decade of gruelling, austerity-driven recession, Greece has forecast economic growth in 2017, in what would be its first annual rebound in seven years.

Europe’s most indebted country will see growth of 2.7% next year partly as a result of an upsurge in tourism, according to the draft budget that Athens’s leftist-led coalition will table in parliament on Monday.

“We are at a turning point at which we can say, with certainty, that we are leaving the recession behind us,” the national economy minister, Giorgos Stathakis, said last week.

The blueprint, which officials hope will form the basis of talks when lenders begin a second review of the economy later this month, is expected to highlight better-than-expected tax revenues and renewed interest in investments under the country’s privatisation programme.

Insiders said Greece would easily meet its bailout goal of achieving a surplus – excluding debt-servicing costs – of 0.5% GDP this year. Its draft budget is projecting a 1.75% surplus for next year in line with last summer’s €86bn (£74bn) rescue programme.

More
Posted by Yulie Foka-Kavalieraki at 12:34 AM