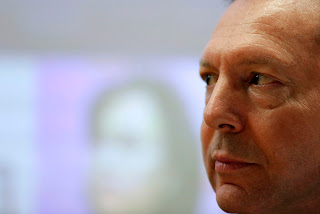 In the battle of wits between Greece’s central bank governor and Prime Minister Alexis Tsipras, the former seems to have won the latest round, giving him a leg up should he harbor any ambitions of a return to politics.

Stournaras, a former finance minister, threatened to put Attica Bank under administration if it didn’t appoint his nominee as chief executive officer. The move ruffled feathers in the government, which sees Attica -- majority owned by state-backed pension funds -- as a vehicle of influence over the financial sector as the only lender falling outside the European Central Bank’s direct regulatory purview. Faced with Stournaras’s threat, Attica shareholders backed his nominee on Tuesday, bolstering the Bank of Greece governor who has questioned Tsipras on everything from his tax-heavy fiscal policies to his dealings with creditors.

“There’s a cold war going on between the two that occasionally flares into skirmishes,” said Aristides Hatzis, a professor of law and economics at the University of Athens. “In Syriza and the government there are a lot of voices that want to see Stournaras’s head roll, but the leadership understands it can’t do that because he has the ECB’s backing.”