In interview, Tsipras sketches out path for Greece to exit crisis 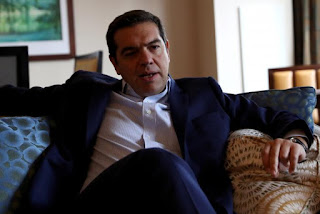 Greece's prime minister on Tuesday sketched out a path he hopes will finally allow his country to exit its seven-year-old economic crisis, holding out the possibility of positive growth this year and a partial return to the bond markets in 2017.

Alexis Tsipras told Reuters in a rare interview that government revenues and tourist flows have been strong and that Greece could grow by 0.2 to 0.4 percent this year, well above Eurostat's forecast for a 0.3 percent contraction.

Asked if he thought Greece could meet or exceed Eurostat’s forecast of 2.7 percent growth for next year, Tsipras noted that it had exceeded the predictions so far this year and said that he expected "the same" for 2017. However, he said this would depend on the messages sent to the financial markets and whether there is a return of foreign investment.

He also said he hoped Greece could within the next six months be included in the European Central Bank's quantitative easing (QE) programme from which it has so far been excluded because of its low credit rating.

If that happens, it could then test markets’ appetite for Greek debt next year. "I think that will be a strong message we will be ready to prepare the procedure to issue bonds," he said.

More
Posted by Yulie Foka-Kavalieraki at 9:50 AM