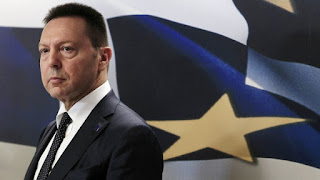 Greek prosecutors have raided an office belonging to the wife of Yannis Stournaras, the central bank governor, as part of an anti-corruption investigation allegedly linked with the consulting company she owns, a bank official said.

The probe concerns an EU-funded advertising campaign for a Greek state organisation in which Mindwork Business Solutions, a consulting company owned by Lina Nicolopoulou, the governor’s wife, took part as a subcontractor.

Documents and electronic material belonging to Ms Nicolopoulou and her team were seized, according to Proto Thema, a Greek news website that first reported the raid.

Officials at the Athens prosecutor’s office and the government’s anti-corruption department could not be reached for comment.

Ms Nicolopoulou strongly denied wrongdoing. “The real target is my husband who is being attacked in order to serve specific political purposes,” she said.