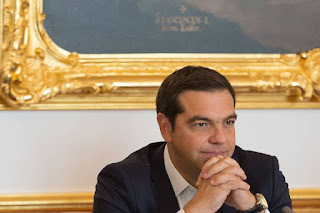 Greece’s government and central bank sought to defuse a power struggle over a troubled lender, which has reignited tensions between the central bank and the ruling left-wing Syriza party.

Prime Minister Alexis Tsipras met with Bank of Greece Governor Yannis Stournaras on Saturday in a bid to smooth a row over who should run Attica Bank, a lender that finances public-works contractors, 57% of whose loans are nonperforming.

“There is no plan to sideline me,” Mr. Stournaras told reporters, responding to suggestions that the government was seeking to weaken the independent central bank. A senior government official said there were “no shadows” over relations with the Bank of Greece.

The spat escalated in recent days when police raided a business owned by Mr. Stournaras’s wife, the morning after Mr. Stournaras had told the government he wouldn’t approve its preferred candidate for chief executive of Attica Bank.