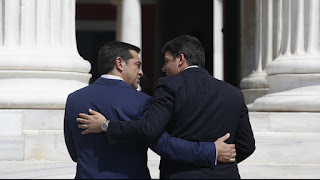 Just when his government’s indolent attitude to economic reform is again exasperating Greece’s eurozone partners, Alexis Tsipras presided over a mini-summit of southern European leaders that was the diplomatic equivalent of a poke in the eye to Germany and other creditors.

Friday’s seven-nation meeting in Athens, to which the leftwing Greek premier invited representatives of Cyprus, France, Italy, Malta, Portugal and Spain, produced a familiar list of rather unfocused demands for EU economic policies, putting the accent on growth and employment instead of austerity.

In the eyes of Germany, the Netherlands and other northern eurozone nations, the mini-summit was more significant for giving an unwelcome foretaste of how a caucus of southerners might emerge as a vocal lobby in the EU after Britain’s departure reduces the bloc to 27 members.

Markus Ferber, a conservative Bavarian deputy in the European Parliament, voiced concern that “the ‘Club Med’ group, after Britain’s exit, will possess a blocking minority, with which they will obstruct all the laws that don’t suit them”. Mr Ferber described this group as “a strong coalition of reform-resistant redistributors”.