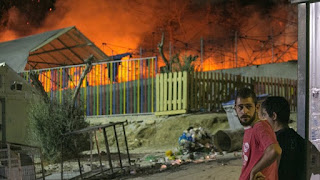 A fire that swept through an overcrowded camp for refugees and migrants on the Aegean island of Lesbos serves as a stark reminder of the worsening conditions faced by more than 60,000 asylum seekers stranded across Greece.

Tensions were running high in the Moria camp even before Monday night’s blaze, which broke out after a clash between Afghans and Pakistanis over food distribution, engulfing scores of tents and containers that provided shelter for about 4,500 people in facilities designed for around 2,500.

More than 3,000 asylum-seekers were evacuated, a Greek police official said. There were no casualties but the UN High Commission for Refugees, which has a presence at the camp, said more than 30 people with light injuries were treated at a local hospital.

The fire also burnt nearby farmland and olive groves, further angering local residents who have grown increasingly resentful of the asylum seekers over the summer as foreign tourist arrivals plunged and Greek visitors also stayed away.