Fatigued Investors Want Draghi to Buy Greece Before They Do

As Greek business leaders and government officials presented to investors last week in London a list of reasons why valuations of the country’s assets make them attractive, Danechi’s Duet Asset Management took note. But what he wants to see is for Greece to show it can make good on pledges made to euro-area creditors so it can be included in the European Central Bank President Mario Draghi’s quantitative easing program.

“Valuation is there, but few believe that this government can deliver,” said Danechi, who helps oversee $1.5 billion in emerging-market assets at Duet. “If Greece goes into the QE program then the mood would turn automatically.”

Investors are in no rush to pour money into a market where the value of stock and bond holdings has been repeatedly crushed. In dozens of meetings at the annual Athens Stock Exchange roadshow, Greek executives were bombarded with well-worn questions about political risk, delayed reforms, lack of liquidity, excessive corporate taxes and an unfavorable business climate. 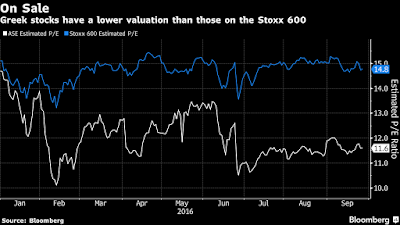