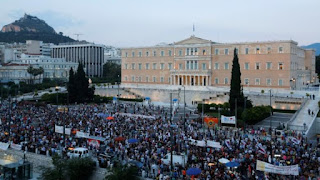 Greece has had to go through tougher austerity than it would have otherwise been necessary, because of the populist stance of the left-wing government of Alexis Tsipras in 2015, European Commission Vice-President Valdis Dombrovskis said on Monday.

Tsipras, who took power in January 2015, rejected belt-tightening in public finances requested by lenders in exchange for emergency loans and reversed some of the reforms introduced by the previous Greek governments.

As new loans were frozen, Greece defaulted on the International Monetary Fund in July 2015 and had to introduce capital controls to prevent its banking system from collapse.

"Populism doesn't solve problems. Populism creates problems," Dombrovskis told a round-table in Riga in a discussion on the growing support for populist parties in many EU countries.