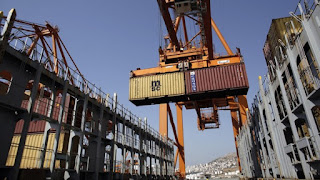 The Greek parliament has approved a fresh package of structural measures required to unlock another €2.8bn slice of bailout funding, including the establishment of a controversial fund to accelerate the country’s lagging privatisation programme.

The ruling leftwing Syriza party and its rightwing coalition partner, the Independent Greeks, won Tuesday night’s vote by a comfortable margin, with hard-left MPs backing the government even though some had decried the sale of public utilities and transport companies as a “crime”.

Among the other measures legislated were additional pension system reforms and further liberalisation of the electricity market. Several other reforms, including sweeping board changes at Greek banks, will be enacted by decree.

Privatisation is an especially sensitive issue for the Syriza-led government, which has been reluctant to complete a series of sales agreed by the previous centre-right government, despite having endorsed them last year as part of Greece’s €86bn third rescue package.

Several extreme-left Syriza cabinet ministers attempted to delay specific deals, among them a €1.2bn concession agreement with Germany’s Fraport to operate 14 regional airports and the €370m sale of a controlling stake in Athens’ port of Piraeus to the China Cosco Shipping group.