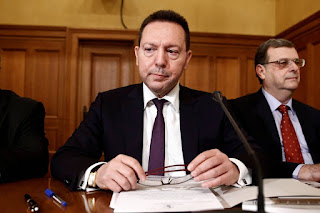 There’s been a lot of hand-wringing in Europe about the rise of right-wing populism, about the clampdown on media freedom and judicial independence in places such as Hungary and Poland. But Greece’s populist government, led by the hard-left Syriza party, seems to share many of the same authoritarian instincts of its formerly communist partners, whose values Syriza claims to abhor.

On Sept. 15, corruption prosecutors in Athens raided the advertising business of Lina Nikolopoulou-Stournara, whose husband, Yannis Stournaras, is the governor of Greece’s central bank. The raid was ostensibly part of an investigation into funds allegedly misused by KEELPNO, Greece’s centre for disease control.

But this raid had been ordered by the corruption prosecutor, Eleni Raikou, and not the magistrate responsible for the case, which is highly irregular. It occurred merely a few hours after Mr. Stournaras had notified the government that he was vetoing its picks for key positions, including the CEO and chairman, of the board at Attica Bank. Attica is a troubled lender closely linked to the construction sector. Mr. Stournaras further declared that until the leadership question was resolved (as it since has been, on his terms), all lending by Attica Bank would be frozen.

Mr. Stournaras has long been the villain in Syriza’s version of the Greek crisis. Their first skirmishes came when, as minister of development in the country’s caretaker government from May to June 2012, Mr. Stournaras tried to push through a number of major investments. Syriza accused him of attempting a “political coup d’etat.”