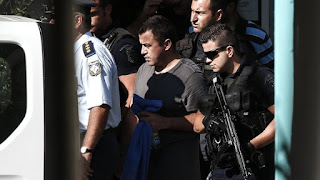 by Kerin Hope and Mehul Srivastava

The first of eight Turkish military officers who fled the country after a failed coup appeared before a Greek asylum committee on Friday in a case that has strained relations between Athens and Ankara — and within the ruling Syriza party.

The officers flew a military helicopter across the border after the attempt to topple President Recep Tayyip Erdogan last month.

Turkey is ratcheting up pressure on Alexis Tsipras, the Greek prime minister, to return the junior officers. While Turkish officials have pushed ahead with a formal extradition demand for the soldiers, they have not made any public statements criticising Greece.

This is in stark contrast to its near-daily attacks on the US for its refusal to extradite Fethullah Gulen, the self-exiled preacher blamed for the coup.

It is not known when the formal extradition hearings will be held, but two Turkish officials said this week that the return of the soldiers would show that Greece and the EU were serious about helping Turkey find the perpetrators of the coup. But the officials also made clear that their return was a symbolic issue, rather than a requirement to complete the investigation.