The Hidden Costs of Volunteering in Greece 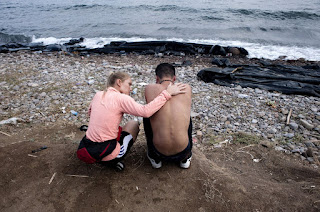 It’s been weeks since Heidi Liedtke left Greece, and still she dreams about the run-down room in an abandoned hospital where she taught English to a group of pregnant teenagers from Aleppo. Even now, her Facebook feed remains a constant stream of updates from Athens, most of her notifications from volunteer groups. Almost every day, she messages her friends back in Greece to make sure they’re all right and safe. Though Liedtke keeps looking up airfare to return, she knows going back will make it harder to leave a second time.

One month after graduating from American University, Liedtke flew to Greece in search of an opportunity to use her Arabic skills and understanding of the Middle East to help, in any way, with one of the biggest humanitarian crises of our time. As one of thousands of independent volunteers, she found herself in one of the most unusual aid situations to date, one that has led to under-qualified individuals handling complex issues.

People come to Greece in search of the opportunity to make some sort of dent in an issue that seems limitless; weeks later, when they emerge from the insular world of refugee volunteering, they find themselves out of their element and out of support.

“Typically I don’t talk about it [to family] because there’s so much to say that I don’t know where to begin,” Liedtke says. “What do I prioritize? The time I distracted a group of children’s attention from a fight on the other side of a caravan? The issues with voluntourism? I can’t sum it up in one conversation.”