The Greek crisis: An autopsy

The Greek crisis is one of the worst in history, even in the context of recorded ‘trifecta’ crises – the combination of a sudden stop with output collapse, a sovereign debt crisis, and a lending boom/bust. This column quantifies the role of each of these factors to better understand the crisis and formulate appropriate policy responses. While fiscal consolidation was important in driving the drop in output, it accounted for only for half of that drop. Much of the remainder can be explained by the higher funding costs of the government and private sectors due to the sudden stop.

For its sheer intensity and duration, the Greek crisis has been quite unprecedented. One measure says it all – real income per capita declined every single year between 2007 and 2013, a cumulated drop of 26%. Since then, it has barely risen.

To put the Greek crisis in perspective, we compare it in Figure 1 with the sample of all ‘Trifecta crises’ since 1980 – the combination of a sudden stop with output collapse, a sovereign debt crisis, and a lending boom/bust. This is the who’s who of financial crises, a distinguished group that includes Argentina and Turkey in 2001, Ecuador in 1999, Indonesia and Russia in 1998, Chile and Uruguay in 1983, and Mexico in 1982. Greece's drop in output was significantly more severe and protracted than any of these episodes. 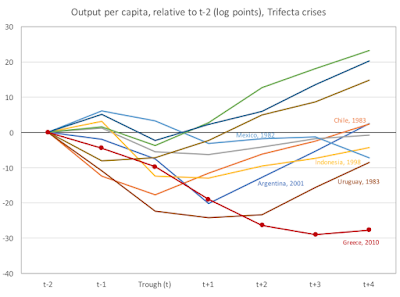