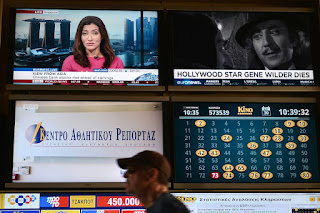 Greece was auctioning off broadcast licenses on Wednesday in a move the left-led government says will clean up a corrupt media sector but that critics say is a bid for political control of TV.

Gathered in a government building in the Greek capital, executives from eight companies started the auction early Tuesday, with offers beginning at €3 million ($3,341,250) and increasing in increments of €500,000.

The sale, which will reduce the number of national private television stations from seven to four, was expected to continue until late Wednesday or early Thursday. Existing broadcasters who don’t win a license are required to go off the air within three months, the government has said.

Under the country’s bailout plan with international creditors, the government promised to auction broadcast licenses for the first time. Licenses have been granted without charge since Greece first allowed private broadcasting in 1989.

The decision by the ruling left-wing Syriza party to license only four channels, however, has outraged Greek media officials and the opposition, who accuse Prime Minister Alexis Tsipras of seeking to forge political alliances with favored business groups.