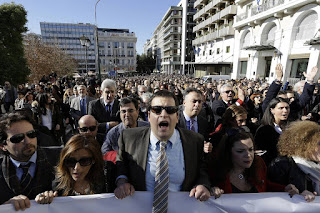 The relative calm in Greece this summer compared to last year’s chaos may lead outside observers to believe that the country’s financial problems are on their way to being resolved. After all, the national government, led by the far-left Syriza party, seems committed to implementing the bailout program it signed last year. And negotiations are already under way for a deal on debt relief.

But these negotiations will likely take a long time. No one expects a meaningful restructuring of Greece’s debt before the next German government is formed at the end of 2017. Until that happens, Athens will labor under requirements for budget surpluses that will suffocate the economy.

This has made a bad situation on the ground even worse. The combination of overambitious fiscal targets and widespread tax evasion has led, throughout the bailout period but especially under Syriza, to constantly rising tax and insurance-contribution rates, which leave even law-abiding, relatively well-off Greeks unable to meet their obligations.

According to calculations recently released by the Kathimerini newspaper, once the full array of new tax and insurance-contribution increases come into effect early next year, real-estate owners who rent out their property may be forced to pay more than 100% of the income they earn in personal and property taxes. Self-employed individuals who make as little as €10,000 ($11,195) a year will have to pay 60% to 74% of it in taxes and insurance contributions. Private-capital firms—a new category of company, introduced during the recent crisis and designed to boost entrepreneurship—will have to hand over 43% to 60% of their profits to the state, even for earnings as low as €5,000 a year.