A year after the crisis was declared over, Greece is still spiralling down 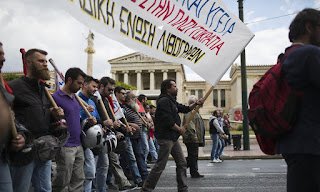 In a side street in the heart of Athens, two siblings are hard at work. For the past year they have run their hairdressing business – an enterprise that was once located on a busy boulevard – out of a two-bedroom flat. The move was purely financial: last summer, as it became clear that Greeks would be hit by yet more austerity to foot the bill for saving their country from economic collapse, they realised their business would go bust if it continued operating legally.

“We did our sums and understood that staying put made no sense at all,” says one sibling. “If we didn’t [offer] receipts, if we avoided taxes and social security contributions, we could just about make ends meet.”

They are far from being alone. A year after debt-stricken Greece received its third financial rescue in the form of international funding worth €86bn, such survival techniques have become commonplace. For a middle class eviscerated by relentless rounds of cuts and tax rises – the price of the country’s ongoing struggle to avert bankruptcy – the draconian conditions attached to the latest bailout are invariably invoked in their defence. Measures ranging from the overhaul of the pension system to indirect duties – slapped on beer, fuel and almost everything in between – and a controversial increase in VAT are similarly cited by Greeks now reneging on loan repayments, property taxes and energy bills.

Against a backdrop of monumental debt – €320bn, or 180% of GDP, the accumulation of decades of profligacy – fatalism is fast replacing pessimism on the streets. “Our country is doomed,” sighs Savvas Tzironis, summing up the mood. “Everything goes from bad to worse.”