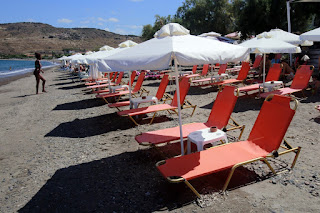 This is a story about war and waiting tables, about how a line can be drawn between the chaos in Syria and why Theodore Kourniaris lost his job on the Greek island of Lesbos.

In the eastern isles of Greece, the hidden face of the European refu­gee crisis is an everyday dude like Kourniaris, who suspects he has been cheated — not only by Syrian President Bashar al-Assad, who drops barrel bombs on his own people, but also by leaders such as German Chancellor Angela Merkel, who threw open the door to refugees and then slammed it shut.

Kourniaris, 27, is a Greek waiter who lives with his mom. He has spent every summer season since he was a kid humping bottles of chilled retsina and plates of grilled octopus to German and British and Dutch ­merry-makers in packed tavernas in his picture-postcard-perfect village on the sea.

“They’re gone, man,” said Kourniaris. The April-to-October trade that sustains the island has — poof! — vanished, as middle-class European pensioners and young families with children decided they would not spend their holidays on an island that hosted 600,000 war refugees and economic migrants over the past 18 months.