Where Do We Stand on Greek Debt? 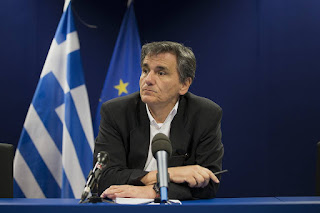 Why was Monday’s Eurogroup important?

Eurozone finance-ministry officials, for the first time, discussed in some detail what they might be willing to do to ease Greece’s debt burden.

The basis for this debate was a so-called nonpaper — the kind of document that is meant to be confidential but somehow always finds its way to an enterprising journalist — dubbed “Greece: Proposal for Debt Relief Measures” (full document behind the link). The nonpaper was prepared by Greece’s European creditors, namely the European Commission, the European Central Bank and the European Stability Mechanism, which raises the money for Athens’ third bailout.

As we explained here, the suggested measures range from capping interest rates and principal payments on Greece’s loans from the European Financial Stability Facility, which funded the country’s second bailout, to returning central-bank profits from Greek government bonds to Athens. Maybe more controversially, it also suggests that any money left over once the €86 billion eurozone rescue program expires in 2018 could be used to pay back more-expensive loans from the International Monetary Fund.