The IMF and calling Berlin’s bluff over Greece 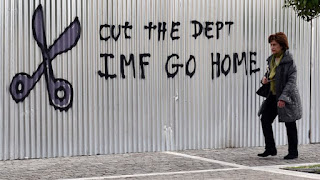 At one level, the recurring Greek crises fit the idea from Karl Marx of history repeating itself, first as tragedy then as farce. Greece came close to a eurozone exit last summer. While it will probably come close this year, it is unlikely to leave.

But prepare for some tense moments in the next few weeks and months as Greece and its creditors struggle to agree the first review of last year’s bailout.

The International Monetary Fund has concluded that Greek public debt, at 180 per cent of gross domestic product, is unsustainable; as is the agreed annual primary budget surplus, before interest payments, of 3.5 per cent of GDP. The fund insists on debt relief, but Germany resists.

A year ago Angela Merkel, German chancellor, and Wolfgang Schäuble, her finance minister, sold the Greek bailout to their party and parliament as a loan only. They argued that once you accept a debt writedown, you turn a loan into a transfer. And once you accept the principle of a one-off transfer to Greece, you are on a slippery road to what the Germans call a transfer union, one where they pay and others receive.