Study: Bailouts for Banks, Not Greeks 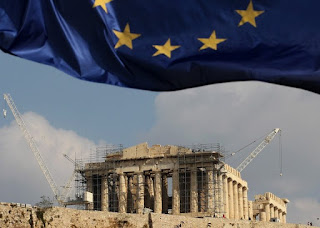 by Jan Hildebrand and Thomas Sigmund

After six years of ongoing bailouts amounting to more than €220 billion, or $253 billion in loans, Greece just cannot get out of crisis mode.

It is tempting to blame those who refused to reform the country’s pensions and labor markets for the latest calamity. But a study by the European School of Management and Technology, a copy of which Handelsblatt has obtained exclusively, gives another perspective. The aid programs were badly designed by Greece’s lenders, the European Central Bank, the Europe Union and the International Monetary Fund. Their priority, the report says, was to save not the Greek people, but its banks and private creditors.

This accusation has been around for a long time. But now, for the first time, the Berlin-based ESMT has compiled a detailed calculation over 24 pages. Their economists looked at every individual loan instalment and examined where the money from the first two aid packages, amounting to €215.9 billion, actually went. Researchers found that only €9.7 billion, or less than 5 percent of the total, ended up in the Greek state budget, where it could benefit citizens directly. The rest was used to service old debts and interest payments.

The report comes as the European Union and the Greek government prepare to hold negotiations about further debt relief. E.U. Economics Commissioner Pierre Moscovici said he hoped all sides could reach an agreement at a special meeting of the Eurogroup of euro-zone finance ministers next Monday. Extensions of credit repayment periods, deferments and freezing interest rates are all being discussed. This “debt relief light” would not affect private investors – just the loans from Europeans.