Just enough Greek debt relief to keep IMF on board 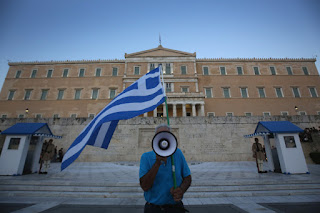 The finance ministers of the eurozone early Wednesday agreed on a new set of funding measures for Greece that was bolder than forecast but nonetheless falls way short of the radical steps needed to put Athens on a sound financial path.

One of the package’s most important consequences will be to allow the International Monetary Fund to continue participating in the Greek financial rescue after the Eurogroup of finance ministers agreed on the initial details of a debt-relief program for the cash-strapped country.

The finance ministers’ deal, reached after an 11-hour meeting, was deemed “a major breakthrough” by Eurogroup President and Dutch Finance Minister Jeroen Dijselbloem. But its only certain impact is that it will allow Greece to meet payments due this summer, thanks to the first disbursement of a €7.5 billion loan tranche next month.

Beyond that, six years after the Greek debt crisis shook the eurozone to its foundations, a Eurogroup deal may once again be seen as a messy compromise mostly aimed at playing for time. Once again, it can be criticized for skirting the radical decisions that would allow Greece to stand on a firmer footing. And once again, it will be seen as a cynical ploy to avoid those decisions because of electoral politics: in this case, postponing major choices until after the 2017 German elections.