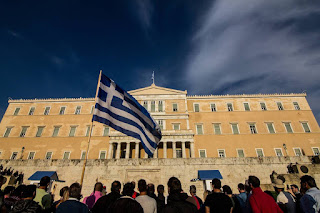 The International Monetary Fund is pressing the eurozone to let Greece skip paying interest or principal on bailout loans until 2040, say officials familiar with the talks.

The IMF wants the loans to Greece to fall due gradually in the following decades, and as late as 2080, according to the IMF’s proposal.

Greece’s interest rate on eurozone loans would be fixed for 30 to 40 years at its current average level of 1.5%, with all interest payments postponed until loans start falling due, under the IMF proposal.

The IMF’s demands go far beyond what Greece’s eurozone creditors have said they are willing to do to help Greece regain its financial health.