IMF Said to Seek Delay of Greek Loan Repayments Until 2040

The International Monetary Fund proposed that Greece shouldn’t make payments on its European bailout loans until 2040, underscoring key differences with euro-area lenders over the future of the Greek economy.

The Washington-based fund’s debt-restructuring proposal, contained in an IMF document obtained by Bloomberg News, goes much further than anything advanced by euro-area creditors who are locked in talks to trigger Greece’s next aid payout. Finance ministers from the currency union will meet on May 24 in Brussels to discuss the debt-relief options.

The IMF wants all payments on European loans granted to Greece since its first bailout in 2010 to be deferred until at least 2040 with maturities extended until 2080, according to the note. Interest payments on loans from the euro area’s crisis fund would be fixed at a maximum 1.5 percent until at least 2045. The IMF’s projections for the Greek economy rely on a baseline assumption that debt will rise to 293.8 percent of gross domestic product by 2060 without the proposed measures. 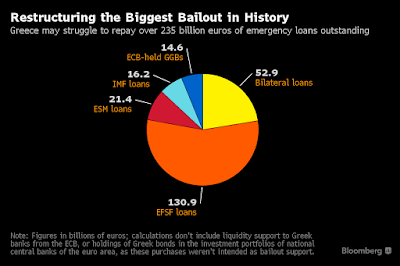 Posted by Yulie Foka-Kavalieraki at 1:41 PM