How Greece Got Another Debt Deal 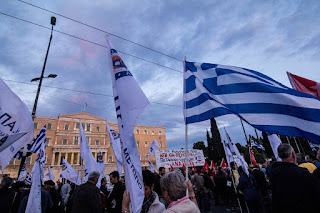 The deadlock between Germany and the International Monetary Fund which has held Greece’s bailout funding hostage this spring has been broken. The deal falls short of a definitive peace that resolves conflicts between Greece and its international creditors. Rather, it’s a truce that aims to keep the difficulties and tensions manageable for a while longer. But for how long?

Q: What Does the Deal Boil Down To?

A: The IMF told eurozone governments it will recommend a new Greek loan facility to its board – the precondition that Germany had set for releasing any further bailout funding for Greece. In return, the IMF got much less than it wanted in the way of reductions to Greece’s debt.

Instead of a European decision now to restructure Greece’s bailout loans progressively in coming years, the IMF won only a promise by Germany and other eurozone governments to review the situation in 2018, and to take measures “if…needed.”

The IMF said it still needs to crunch the numbers, thus withholding its final consent to rejoining the bailout as a lender. But that looks more like a face-saver than a usable escape hatch. It’s unlikely that the IMF can withdraw now, because it has already given in on the main question that divided the fund and Berlin. The IMF agreed last night that final decisions on debt relief will be delayed until the end of the bailout program, as Germany wanted.