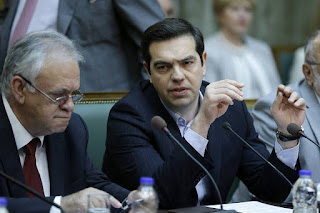 Greece’s leader Alexis Tsipras on Tuesday claimed a major breakthrough in its debt-and-austerity talks, even as officials from Greece’s creditors warned that big obstacles remain to a deal that keeps the country afloat this summer.

“After six years of continued cuts, bad news and harsh austerity, we finally had some good news,” Mr. Tsipras said in a televised speech to his cabinet. He said Greece was on course to get fresh bailout loans without having to legislate additional austerity measures.

Eurozone finance ministers also heralded progress after talks in Brussels on Monday. But major sticking points remain. European officials hope they can be resolved by the next ministerial meeting on May 24. Some warn it could take longer.

The International Monetary Fund and Greece are still at odds over what Athens must do to ensure it hits its tough fiscal targets. The IMF and Germany remain far apart on how much debt relief Greece needs, with Berlin determined to avoid signing up to any significant restructuring of loans until 2018.