Greek police start to move migrants out of Idomeni camp 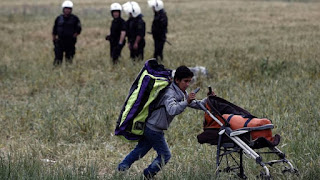 Greek police have begun transferring refugees and migrants from a tent camp at Idomeni next to the shuttered border crossing with Macedonia to accommodation in the city of Thessaloniki.

The operation to close the site where more than 8,000 people have been camped out in overcrowded conditions will take about a week, said George Kyritsis, head of the government’s migration co-ordination unit.

More than 14,000 police officers, including riot squad units sent from Athens, sealed off surrounding roads early on Tuesday and instructed volunteers and aid workers to leave the camp. Journalists and television crews were kept 6km from the site.

Buses began transporting people from the camp shortly after 7am, while dozens left on foot. By evening, more than 2,000 people had been bussed to Thessaloniki, where they will be housed in newly refurbished former industrial premises, police said.