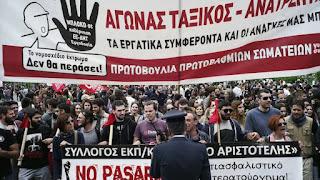 The Greek parliament has opened a two-day debate on tough new pension and tax measures demanded by bailout creditors amid a wave of unannounced strikes that shut down local media outlets, public transport and ferries to the Aegean islands.

A vote is due on Sunday night in the 300-member house, where the leftwing Syriza party of Alexis Tsipras, the prime minister, and his coalition partner, Independent Greeks, together control a fragile two-seat majority.

The premier unexpectedly brought forward the vote hoping to convince eurozone finance ministers meeting on Monday that Greece is now committed to completing a first review of its €86bn bailout after six months of foot-dragging over details of the reforms.

Greek officials were upbeat on Saturday about a call by Christine Lagarde, the International Monetary Fund chief, for negotiations to begin immediately on granting debt relief for Greece. At the same time, the Fund backtracked on earlier demands for another €3bn in “contingency” budget cuts, saying they were “fruitless”.

“It’s a positive development for Greece after weeks of fighting hard against the contingency measures,” said a senior Greek official. “Debt relief is expected to be part of the discussion on Monday.”