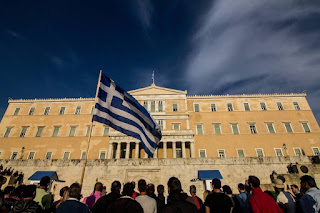 Greece will not accept a bailout deal without a concrete agreement for debt relief from the country’s European creditors, a top aide to Prime Minister Alexis Tsipras said.

“We want real solutions, not interim solutions,” Nikos Pappas, Greece’s Minister of State, said in an interview Friday after several days of talks with senior U.S. officials. “No more kicking the can down the road.”

Although Mr. Pappas said he’s “very optimistic” Greece and Europe will seal a final accord on debt relief by May 24, his comments underscore the hurdles ahead as the Athens government tries to negotiate fresh financing to keep the country’s finances afloat.

Without fresh bailout funds, Greece faces bankruptcy in July at the latest. That could revive risks across the eurozone, which is already grappling with a migration crisis, a movement in the U.K. to leave the European Union and the rise of populist parties across the continent.

European powerhouse Germany is pushing Greece and the IMF to accept another bailout agreement based on possible debt relief in the future. The fund, trying to regain credibility it lost in the first two failed Greek bailouts, is taking a firm stand on debt restructuring. It wants defined commitments that would definitively reduce the country’s obligations in exchange for further budget tightening.