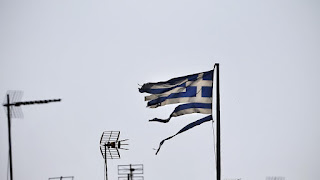 The Greek crisis erupted in 2009 and peaked for the first time in the spring of 2010. Unable to refinance its enormous debt, Greece was bailed out by the European Commission, the European Central Bank, and the IMF. The bailout prevented a major economic catastrophe but signaled the start of a protracted economic and political drama that spread to the rest of the eurozone. In Greece, the crisis peaked twice more: in the summer of 2012, when two successive elections left Greece’s political system in shambles, and in the summer of 2015, when Greece’s newly elected left-wing government unsuccessfully threatened its European creditors and the IMF with a massive default in a failed attempt to win some debt relief and a break from austerity policies.

At each inflection point, commentators wrung their hands over the potential contagion from a catastrophic Greek default and subsequent exit from the eurozone. The near collapse of June-July 2015 was perhaps the most dramatic, peaking with a bank shut-down and bizarre referendum in which the embattled Greek prime minister and anti-austerity champion, Alexis Tsipras, urged Greeks to reject a bailout package that he had just negotiated with Greece’s Troika of creditors.

In the end, the doomsayers were wrong all three times. Grexit did not happen and the euro survived. As for the July 2015 showdown, its resolution was decidedly anti-climactic. Greeks voted “no” in the referendum, but faced with the prospect of complete economic collapse, Tsipras executed an undignified U-turn, settling for an 85 billion euro ($96 billion) bailout, the country’s third since 2010. A new round of elections was called in September 2015. Tsipras won again, but with the exact opposite mandate of the one that he had before: instead of abolishing austerity, he now promised to implement it. The weeks wore on and, as before, Greece retreated from the global headlines.