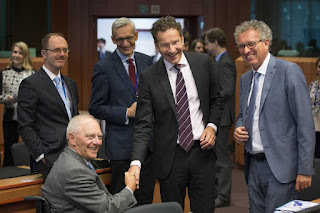 Time and again, the eurozone has demonstrated that it is bound together by impressive reservoirs of political will: not only the will of debtors such as the Greeks, for whom the euro is both a trusted store of value and a symbol of their common European destiny, but also the will of creditors, who have been unwilling to risk the great costs and inevitable political upheavals of a eurozone breakup. Indeed, the determination to reach a deal was even greater at a time the breakup of the European Union itself is on the table in the U.K.’s Brexit referendum.

Even so, the deal agreed on Tuesday night is hardly the decisive break in the Greek debt crisis originally envisaged under the bailout deal thrashed out last summer. By now, Athens was supposed to have undertaken far-reaching reforms of its tax and pension system, the eurozone to have delivered meaningful debt relief, and the International Monetary Fund to have agreed to help finance the program.

Instead, Greece has promised to tackle the reforms “if needed” to hit its 2018 budget target, the eurozone will deliver the debt relief “if needed” when the program ends in 2018, and the IMF will join the program by the end of this year, subject to technical clarifications. This is a classic euro-fudge, whose purpose is to kick the can decisively down the road, deferring the grittiest political decisions until 2017 and 2018.

More
Posted by Yulie Foka-Kavalieraki at 12:17 AM