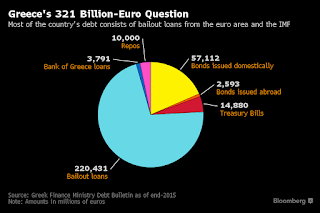 Greece returns to center stage on Monday when aid deliberations by its international creditors will signal whether the country faces a renewed period of political drift or wins some breathing space after six years of turbulence.

The euro area and the International Monetary Fund will assess whether Greek Prime Minister Alexis Tsipras has made enough budget-tightening commitments to gain another disbursement of emergency loans. At issue is an IMF demand for fiscal “contingency measures” worth about 3.5 billion euros ($4 billion) in case Greece strays off budgetary course.

Such a package, equal to 2 percent of Greece’s gross domestic product, is politically thorny for a premier who promised voters he’d oppose any extra austerity and who governs with a three-seat parliamentary majority. Should the IMF give the Greek government insufficient wiggle room at the meeting with euro-area finance ministers in Brussels, Tsipras could end up calling snap elections or a referendum -- both of which featured last year when Greece came close to a euro exit.

“The nature of the contingency package could determine the government’s fate, as it would be very difficult to secure the required parliamentary majority for detailed measures,” Wolfango Piccoli, an analyst at Teneo Intelligence in London, said in a May 6 report. “The risk of snap polls could increase significantly if the lenders decide to play hardball.”

More
Posted by Yulie Foka-Kavalieraki at 1:05 AM