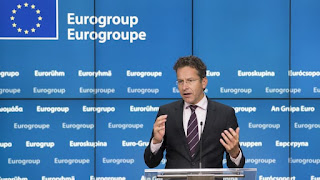 Greece’s international creditors have bought time to secure the country’s financial future after agreeing broad but inexact principles to ease its debt mountain and break an impasse between Germany and the International Monetary Fund.

After almost 11 hours of talks in Brussels, eurozone finance ministers and the IMF agreed to a range of measures to restructure Greece’s debts when its €86bn bailout ends in 2018 — but put no figures on the concessions and left them subject to political decisions by eurozone countries. Most significant decisions would be taken after the German federal elections next year.

Reacting to the news of the breakthrough on Wednesday, Greek 10-year bonds yielded under 7 per cent for the first time since November.

One of the debt relief options involves dramatically reducing the IMF’s exposure to the Greek programme by buying out up to €14.6bn of its loans. For now, the IMF said it would participate financially in the programme at some stage later this year — a crucial demand for Germany — but only if the eurozone committed to a scale of relief that meets the fund’s normal lending guidelines.

“We have achieved a major breakthrough on Greece which enables us to enter a new phase in the Greek financial assistance programme,” said Jeroen Dijsselbloem, president of the eurogroup.

More
Posted by Yulie Foka-Kavalieraki at 10:30 AM