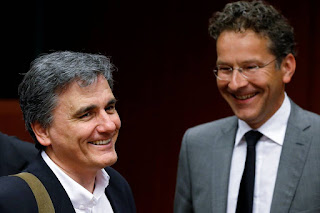 A confidential document debated by eurozone finance ministers detailed for the first time what Greece’s creditors could do to ease the country’s debt load and how that burden would develop over the coming decades without new relief measures.

The document, which was reviewed by The Wall Street Journal, served as the basis of Monday’s emergency meeting, in which the ministers discussed for the first time the possibility of further debt relief for Greece. The finance chiefs said they aimed to reach a deal on the matter by their next meeting May 24 to resolve an impasse among the country’s creditors and release much-needed bailout funds to Athens.

But the wide variations in the document’s debt projections signaled more difficult discussions ahead among Greece’s lenders over how to allow the country to stand on its own feet again after three international bailouts. Those creditors include the 18 other eurozone countries—led by Germany, which opposes all but minimal changes to Greece’s debt burden—and the International Monetary Fund, which wants to see as much relief as possible.