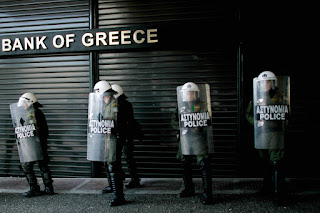 Greece and its creditors may have averted a crisis by agreeing on the release of another dose of bailout money, but the deal does little to address a deeper problem: Europeans still don't want to put their money there.

The flow of capital between the rest of the euro area and Greece offers a useful indicator of confidence in the integrity of the currency union. It can be tracked by looking at the Bank of Greece's liabilities to other central banks in the currency union -- a number that rises, for example, when concerns that Greece will abandon the euro prompt people to move currency out of the country.

The ascendance of Prime Minister Alexis Tsipras's leftist Syriza party to power, and its prolonged standoff with creditors, prompted an exodus: During the year through June 2015, an amount equivalent to more than 40 percent of Greece's annual economic output fled the country. This stopped after Tsipras did a U-turn in July, agreeing to harsh deficit-reducing measures in return for more loans. Not much private money, though, has come back since then -- reflecting both the effect of capital controls and persistent concerns about whether Greece will remain in the euro area.