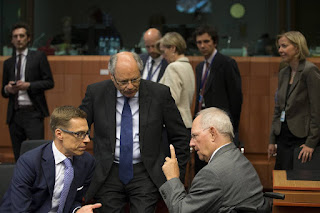 A truce between Greece’s creditors averts an immediate panic over Greek bankruptcy this summer, yet as officials and onlookers digested the deal, it became apparent that less was agreed than meets the eye.

The deal, struck in the small hours of Wednesday morning at the Eurogroup meeting of eurozone finance ministers in Brussels, broke an impasse between Germany and the International Monetary Fund that was holding up Greece’s bailout funding for this summer.

But by papering over deeper differences, the deal sets up tough haggling over the country’s debt and economic overhauls for this fall and beyond.

The main breakthrough, heralded by German Finance Minister Wolfgang Schäuble, is that the IMF agreed in principle to rejoin the Greek bailout effort this year with new loans. In return, Germany and other eurozone countries pledged to restructure Greece’s rescue loans in 2018 “if…needed.” That promise fell short of the IMF’s demand that Europe should decide now how it would relieve Greece’s debt in coming years.