A Push for Greek Cuts Even Creditors Think Go Too Far 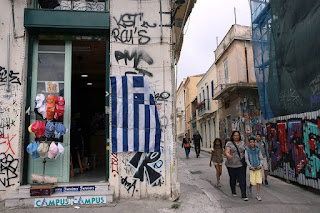 Six years to the week after Greece’s ill-starred bailout began, the government and its creditors are stuck at an impasse that threatens to push the country to the brink of default again.

The deadlock concerns a package of fiscal retrenchment measures that could come to 5% of Greece’s gross domestic product.

The paradox is that it is hard to find a policy maker involved—or an economist—who argues that further belt-tightening on that scale is what Greece’s economy needs at this point. But differences between its main creditors, the eurozone and the International Monetary Fund, are preventing a reassessment of how to put Greece back on its feet.

Back in May 2010, a heavy austerity program in Greece was inevitable. The country had lost control of its finances. No lender was willing to finance the status quo. Greece’s primary budget deficit, which excludes interest, was over 10% of its gross domestic product.