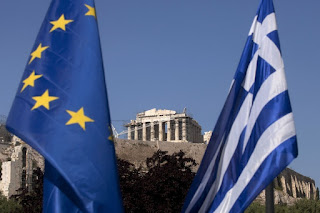 Sometimes it's hard to tell whether history is repeating itself as tragedy or as farce.

Greece, after all, has had plenty of both over the past eight years. Its economy has shrunk as much as the United States' did during the Great Depression, its government has collapsed over and over and over again as a result, and its bailout is in its third iteration — without which it would have been forced out of the euro zone. How bad are things? Greek Prime Minister Alexis Tsipras just touted the fact that his country's unemployment rate has fallen from 26.5 percent to 24.9 percent, and that there was a month last year in which Greece's industrial production grew faster than anyone else's in Europe.

When life doesn't even give you lemons, you have to pick cherries instead.

Greece might not even be able to do that, though, if it starts fighting over its bailout terms again. That would bring back the fear that it wasn't going to stay in the euro zone, and, consequently, the incentive for people to pull all of their euros out of the country's banks before they could get turned into drachmas that wouldn't be worth anywhere near as much. Its underwhelming recovery would become none at all.